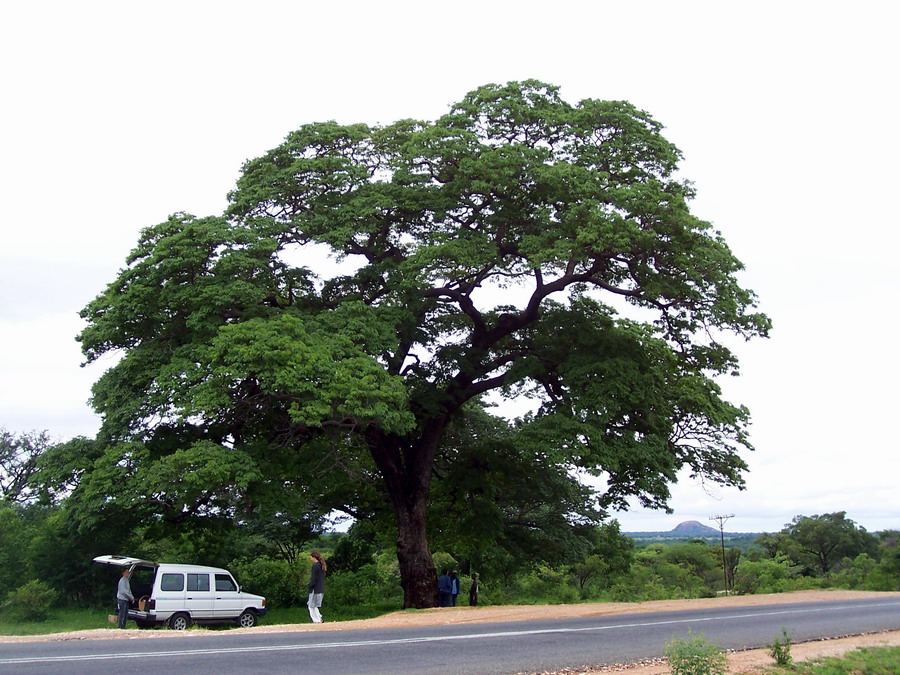 Mort's Tree seen from the West side of the main road

The first part of this text is excerpted from "Historic Trees of Zimbabwe" by L.J. Mullen ISBN 0-9515209-6-2.  Photographs taken by Gordon Poultney and Jenny Brebner - Mort's son and daughter in December 2005.

Ten kilometres beyond Mbalabala (Balla Balla), on the road between Beitbridge and Bulawayo, and 100 m or so after the 76,5 km peg on the left, there stands a magnificent specimen of mountain acacia, Brachystegia glaucescens, and perhaps the largest you are likely to see near any main road in Zimbabwe. The Shona know the species as muunze or guzhe, the Ndebele as umbuze, and the Hlengwe-speaking Shangaans as tsotso. But this particular tree is not just any old mountain acacia, or even any great mountain acacia. It is Mort's Tree and its name is to be found on the copper plaque high up on the trunk.

Who was Mort ? And why is this his tree ? Harold Mortimer Poultney, popularly known as Mort was ... but this is Bronwen Cumming's story - let her tell it !

"Mort Poultney was my father. He came to Zimbabwe from South Africa in 1948 and joined the Department of Conservation and Extension. His first post was in the Figtree-Marula-Matopos area, which he followed with a few years in Bulawayo.

In 1956 he left Government service and moved to Mbalabala where he took over as manager of Irisvale Ranch, owned by Bartelus (Pvt.) Ltd. Here, Mort continued his conservation work, on the farms he managed and in the Intensive Conservation Area movement, and was Chairman of the Filabusi ICA from 1967 to 1973.

Mort was also involved with the Commercial Farmers' Union, and at the time of his death in 1980 he was Chairman of the Matabeleland Branch of the Cattle Producers' Association.

The story of Mort's Tree dates back to the period when the present highway between Bulawayo and Beitbridge was under construction. The Department of Roads wanted to cut the tree down because it was on the road servitude, but Mort was adamant that it would not be touched.

Why ? Apart from being a beautiful tree, it was of great assistance to his farming operations as a landmark for fencing, rounding up cattle, and so on. The argument went on until the day the Department of Roads approached Mort for permission to put up a camp for the road-building unit on Irisvale. 'Yes', said Mort, 'but on one condition - the tree stays'. And you may have noticed that the Posts and Telecommunications Corporation also had to make the telephone line detour round the tree."

'Mort's' plaque was placed on the tree by Keith Harvey, former Chairman of the Natural Resources Board, who was at the University of Witwatersrand with Mort after World War II and came to Zimbabwe at about the same time. 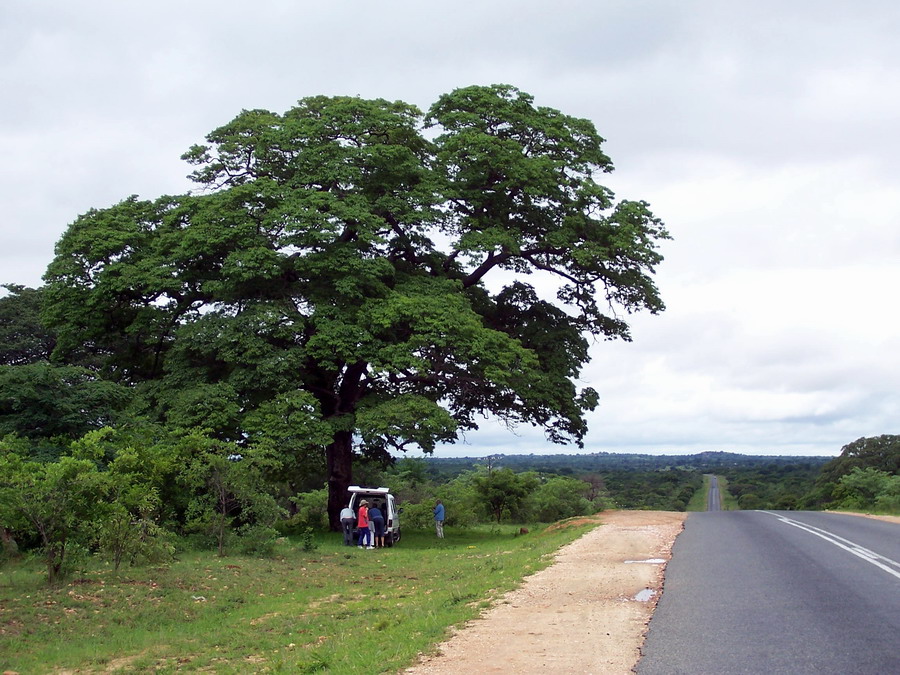 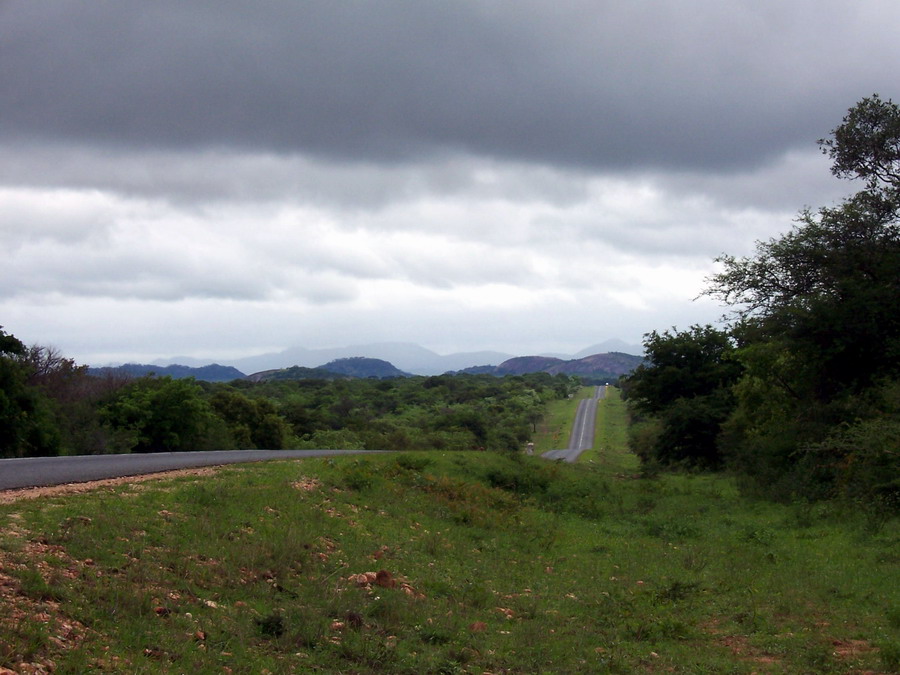 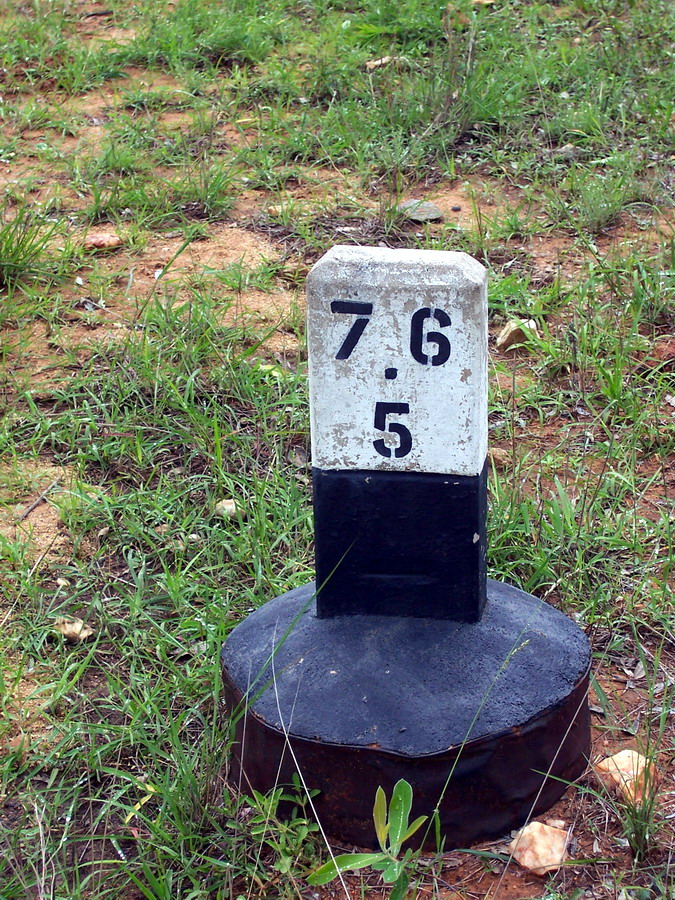 The kilometre marker near the tree - distance from Bulawayo

Gordon writes : In December 2005 while I was visiting Zimbabwe after many years of living in Canada my sisters, two nieces and Mum went to visit the tree.  The original copper plaque had become "engulfed" in a knot of the tree and was somewhat damaged so we decided to replace it with a new sign. I had the honour of climbing the ladder to nail the new sign high up the trunk of the tree. 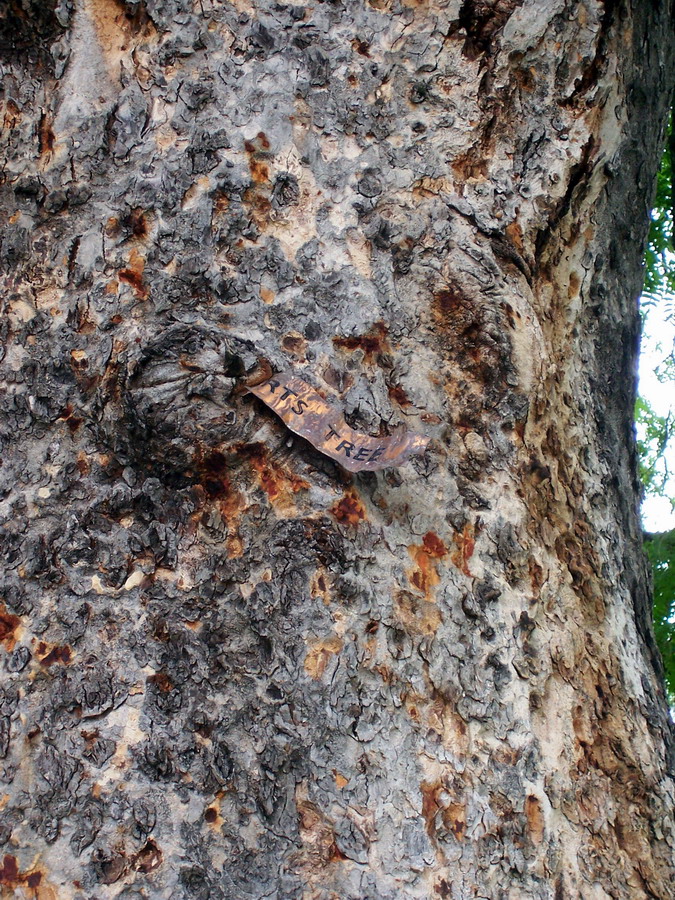 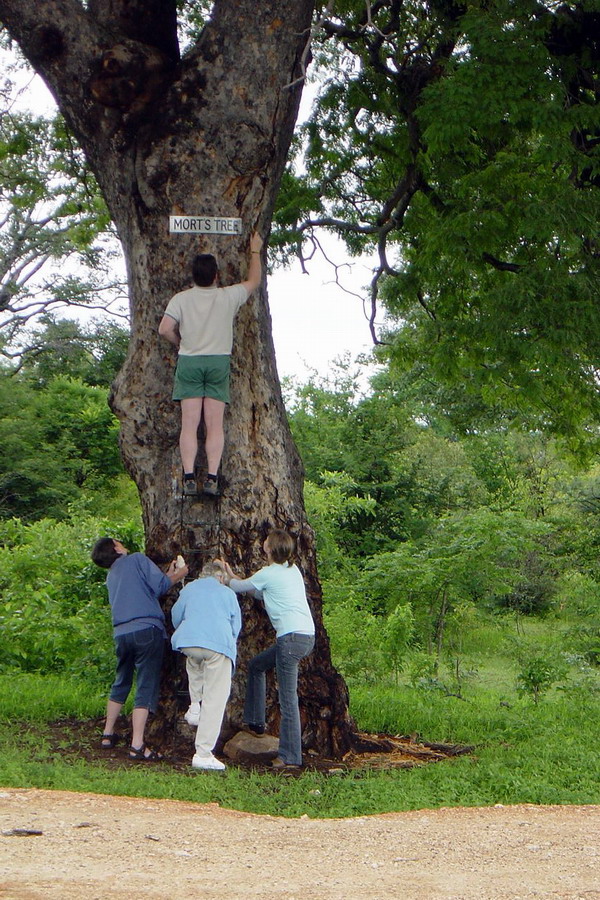 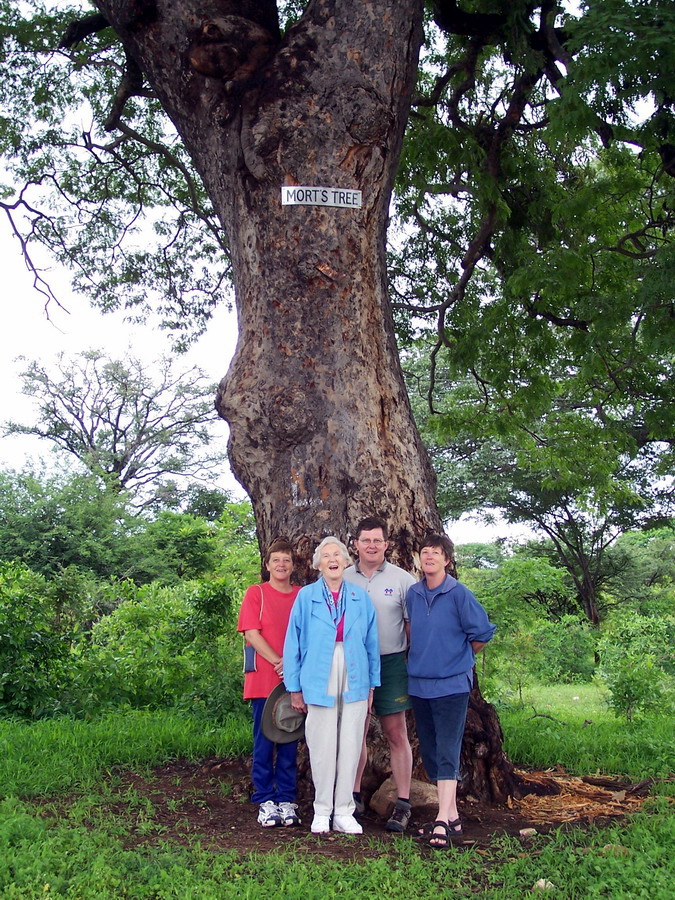 Members of the family stand besides the tree after the new sign is up
From left Jenny, Rita, Gordon and Bronwen

The ladder we used for the job had an interesting history.  It was a folding/scissor ladder originally used by the telephone linesmen to climb up telephone poles to effect repairs.  My former teacher, Martin Sanderson, owned it, having bought it at an auction several years ago for the princely sum of $ 15.00 (old money !).  he said that he got it for such a good price because he knew what it was in its folded state but no one else at the sale did.  Below are photos of the ladder fully extended and then folded to easily fit into a vehicle.  Saved us lots of hassle with a regular ladder and allowed me to reach quite high up the trunk. 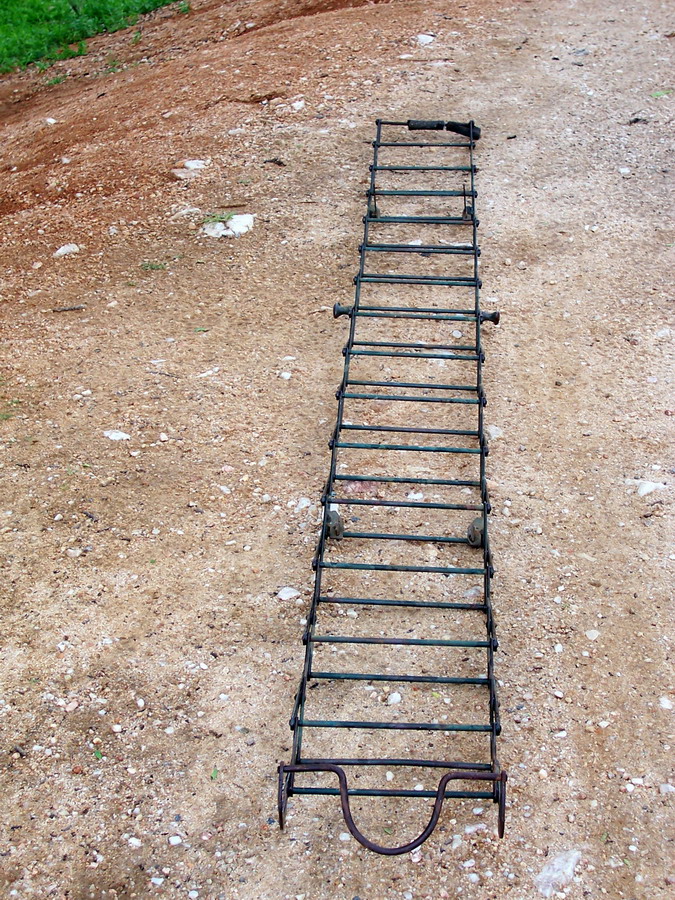 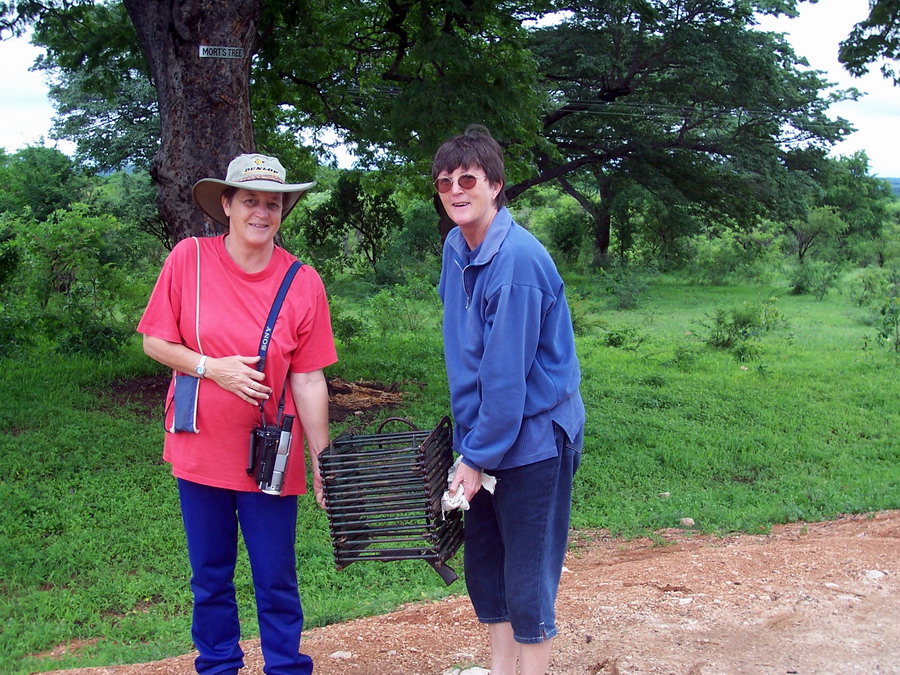 To the east of Mort's Tree are two other very healthy mountain acacia specimens - likely seeded from the older tree. A very pleasant sight and one can only hope that they all survive the ravages of the current situation in Zimbabwe.