September 18 : Jenny, Bronwen and Gordon participated in the local Rotary Run for Life which was a fund raiser in aid of Suicide Prevention and Mental Health in our area. It was an amazing event - well organized and well supported for only being the second year. Despite our good intentions we didn't really "get into" it this year so didn't raise a lot of money, but we had a great time and will be back again next year. Jenny did the 5km walk and Bronwen and Gordon did the 10km run ! We hadn't trained very much so had to take the odd walk breaks to catch our breath and rest the aching muscles, but we did get done in a fairly decent time of 1 hour 10 minutes. Pretty stiff in the thighs for the first few days afterwards but otherwise no major ailments !! 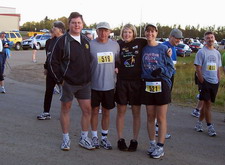 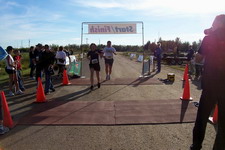 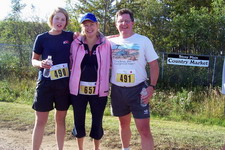 September 5 : Today, the first anniversary of Simon's death was okay. We had quite a few people drop by the house to spend time with us and several calls, e-mails and cards of remembrance. We heard wonderful testimonies from two people, for the first time since Simon died, on impacts that he has had on those individual's lives and we witnessed (as has happened before) reconciliation between two other individuals who had been unable to speak to each other for years !! That is the true blessing of hope out of our tragedy.

In the evening we had a very special time. Jenny's step-bother, Anthony, is home on furlough from the Caucuses where he is a missionary. Over there, being quite orthodox, it is the tradition to have a significant memorial on the first anniversary of someone's passing, so he wanted to share that tradition with us. He had brought a bottle of Georgian wine and a cow horn, from which we drank the wine ! (Traditionally it is a sheep's horn !) A couple of Simon's close friends happened to be by at that time so it was good to pass the wine around and drink our "toasts" to Simon. We know that he would have been smiling down on us all. 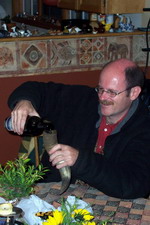 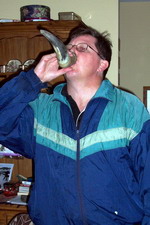 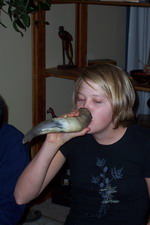 In terms of emotions, the day was really no worse than any other day we've had since he died. Each day we deal with the ache of our loss and grief, but are encouraged and strengthened by the prayers, support and love that people continue to share with us.