November 6 - At this time of year the sun only rises at about 8:30 a.m. and sets by 3:30 p.m. - tracking only a little above the Southern horizon - so the daylight hours are very short which takes some getting used to. When the sun does shine it is very intense light and makes for beautiful photography.  Here are a couple of interesting shots that I took in the last couple of days.  On the left - taken at about 3:15 pm as the sun was setting - a classic arctic halo caused by the sunlight refracting on ice crystals in the air. On the right - the view down the street from where I am staying - taken at 10:30 a.m. The little Anglican church is in the centre and in the background (actually across a bay in the ocean) the Loran Tower which was built after WW II as part of the navigational system for the North. (Loran is short for a long-range navigational system in which position is determined by an analysis involving the time intervals between pulsed radio signals from two or more pairs of ground stations of known position.) 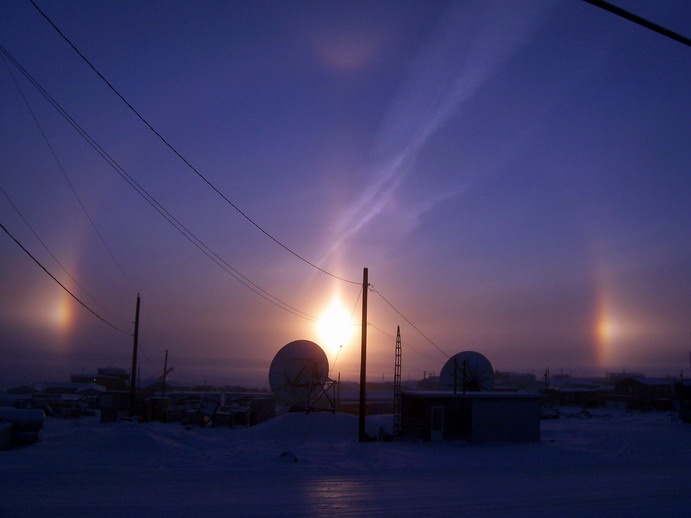 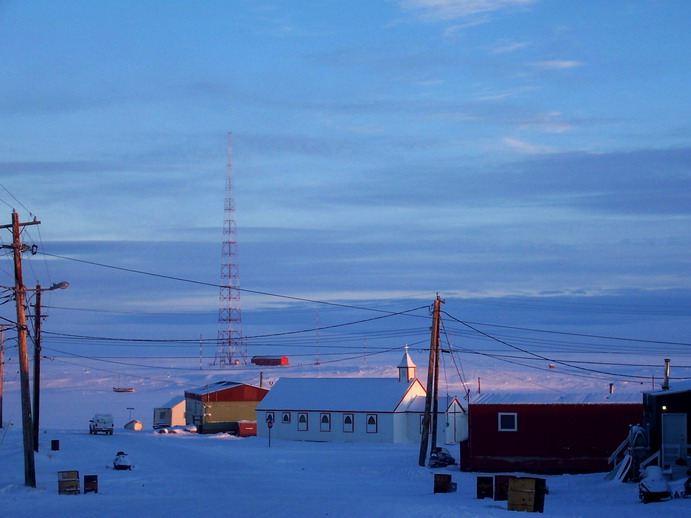 November 1 - I (Gordon) am in Cambridge Bay, Nunavut for two weeks doing a contract accounting job. (I have been here twice before - November 2005 and February 2006 - to work for the same company.)  The work is very intense but challenging and rewarding.  Most interesting has been the experience of travelling to a remote Canadian Arctic community and getting to learn more about it.  Cambridge Bay (CB) is about 1,115 miles (1,794 km) directly North of Edmonton (see map below) and is located on the Southern shore of Victoria Island in the Arctic ocean. The flight - on a Boeing 737 goes in two legs - from Edmonton to Yellowknife then Yellowknife to CB - taking a total of four hours. CB - classified as a Hamlet - is a community of about only 1,600 people of which the majority (80%) are Inuit being the native people of the Nunavut region - more commonly, formerly, called Eskimos.  I will write more about my experiences and observations of CB further on but for now an excellent web site to visit for more information is http://www.answers.com/topic/cambridge-bay-nunavut